To The Moon, Scooter! 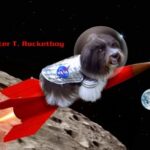 Scooter is over the moon!

May’s Dog of the Month just celebrated his second birthday on April 30.  He spent part of the day working on his Agility at the Zoom Room, and the rest of it being pampered (we’re just guessing about the pampering, but we’re pretty sure).

Scooter T. Rocketboy went directly from Kokomo Havanese to his parents’ house when he was a wee pup. Since then, he has lived a life of luxury with his people folks, Mike and Denise, and his Yorkshire Terrier sister, Amber Joy. 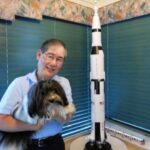 Scooter poses with his namesake

Scooter came by his name through creativity and classic film and television.  His parents came up with the first part of his name from two references:  the first was the 1984 cult classic movie, “The Adventures of Buckaroo Bonzai Across the 8th Dimension,” the second was a character from TV’s “The Muppet Show.”

And the Rocketboy part of his name?  Daddy Mike thinks that the markings on the little Havanese resemble those found on the Saturn V moon rocket.  His middle name: The (hence Scooter “T” Rocketboy).

Scooter loves playing with Amber Joy.  He loved his little big sister from the moment he met her.  According to Mike and Denise, even though Scooter is twice as big as his sister, Scooter lets her chase him and pin him on the ground.  Amber Joy loves Scooter just as much.  Once she’s done pinning him, she will retrieve his favorite toy (known as “Mr. Dragon around the Rocketboy house) and bring it to him so they can play tug-of-war.

Scooter and Amber love each other

Scooter hopes to become a therapy dog.  When a neighbor was mourning over the loss of a pet, Scooter instinctively went to her house and nuzzled her.  His kind act brought a smile to her face and some comfort to her in her time of need.  That’s when Mike and Denise realized he had a knack for it.  (By the way, Mike and Denise, we will be adding a Therapy Dog class soon.)

We are so proud of Scooter T. Rocketboy and his sister, Amber Joy.  They are such a cute pair of fluff balls, we love seeing them jump, run, and scamper over our Agility equipment.  Hey, Scooter, we hope you’ll share your free Private Gyms with your sister!