Millie is the product of an intrepid three-pound Yorkie and a Toy Poodle.  She lives with her parents, Bruce and Liz, and her sister, Daisy.  This little girl came into her dad’s life as a puppy almost five years ago.

Here is Millie’s story in her dad, Bruce’s, words: “Millie was a gift from my mother.  In 2009, my girlfriend at the time and I were throwing a big family gathering that was to take place on Peak’s Island near Portland, ME.  Now, my mom knew that my girlfriend had always had a dog around her all her life but she had been without one since moving to Los Angeles and was suffering from a deep and dark puppy 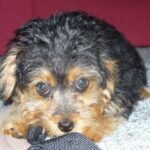 So my mom decided that her gift to us was going to be the cure for that particular ill.  Not only were we getting a dog, but it was going to be her favorite kind, a Yorkie. Being from Philadelphia, she found a farm in Lancaster, PA, that bred Yorkies and made a trip to see what they had available.

There were no pureblood Yorkies for adoption at the time but there was a fresh batch of Yorkipoos that had recently come out of the oven. They found a pile of eight little black pups all wriggling around together and, while my brother was checking them out, Millie jumped over the pile of puppies and landed in front of my mom, who promptly fell in love, vetoed my brother’s choice and took her home so she could bring the puppy to Maine as a surprise for the girlfriend. 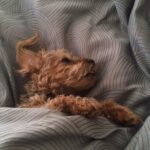 While my girl was completely in the dark, I was made aware of the fact that we were getting a dog so I could prepare our West Coast home a little, even though I had no idea what kind of dog it was going to be.  What I did know was the plan: Once my family got into Portland from Philly, we were going to go visit them at their hotel, around 7:00pm.  When we got there, we would be greeted by my mom and my brother’s wife, who would claim that my brother was “having issues” and was in the bathroom.  After a few minutes of catching up with the less distressed members of my family, Marc would walk out of the bathroom and Millie would be following him, since that is what she had been doing the entire time they had her.  We would be charmed and surprised and it would be all puppy cuddles from there.  That was the plan, that is not what happened.

As it turned out, the morning my family was leaving from Philly, my mother fell off the curb while heading to the car. She was in terrible pain but insisted that they make the trip to Maine regardless and refused medical attention.  My brother, who had never driven further north than Trenton, NJ, did not account for the George Washington Bridge and ended up 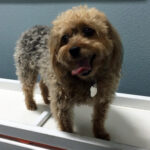 falling hours behind.  He also did not know to avoid driving through Boston at all costs and got jammed up there as well.  All the while my mother was in the backseat, in terrible pain and not taking any kind of painkiller because “she needed to be awake for the dog.” I was unaware of any of this.  All I knew is that I never heard from them… 7:00pm became 9:00pm, then 11:00pm and nothing.

I finally called my brother, who told me what happened.  He also told me he was driving straight to the Portland hospital and he’d call when he was close.  Thus, at 1:30am we arrived at the emergency room intake area to find my mother being loaded onto a stretcher holding a little black and tan puppy, whom she handed to my very shocked girlfriend while saying, “this isn’t how I imagined I would be giving you her” as they wheeled her in.  I went into the hospital with my mother, where we found out she had fractured her pelvis and the girlfriend was stuck outside in front of the hospital, having just learned that she had acquired a very cute and curious puppy.

The gathering, despite what had happened to my mother, turned out to be a success.  We returned to the West Coast and moved Millie into our home. Since we have tile downstairs and carpet on the upper floor, it was decided that the puppy could not go upstairs until she had some potty training under her collar.  Since I did not want to her be all alone at night, I 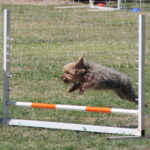 ended up spending the next four months sleeping on the couch with my foot in her crate. Ever since that time, Millie has always by my side.”

How did they decide to call her Millie?   Bruce said, “My girlfriend always hated the pretentious names some people give their dogs and was dead set that the name our puppy got would be the antithesis.  At first she wanted something “butch” like Marge, but there was just no way was I going for that.  After much fighting, we settled on “Old Southern Lady” style  names, and Millie was the compromise that was both unpretentious and pleasant without being ‘butch.’ ”

Now, almost five years later, Millie and her sister, Daisy, are the pride and joy of Bruce and Liz (we don’t know what became of the ex-girlfriend). Millie enjoys a variety of activities, including tug of war, Agility, and disemboweling toys, a trick she learned from Daisy.  She is also partial to cheese or any steak Bruce is trying to eat.

What makes Millie special?  Bruce has the answer:  “Millie has the most intelligent and emotive eyes I have ever seen on a dog, they are almost human.  She just draws you in.” Congratulations, Millie.  It is always such a pleasure watching you hop over the jumps and run the Agility courses!  Enjoy your free Private Gyms!