My early name was Toby, but when I got to Seattle, to Jim and Suzanne and Josh, they gave me the name Bouddi; which means Heart in one of the aboriginal languages of Australia. You see, I’m an Australian Cattle Dog. We’re bred to herd cattle by nipping at their heels, so we’re also called Heelers.
I’m just 15 months old so I’m still learning and growing up. I’m a pretty nervous dog, but I’m getting better about it when I go to classes at Zoom Room. I learn obedience and a fun game called Agility.
I have two brothers and a sister. Tinkerbell is an old, really old little Pomeranian. She thinks she’s the boss of us, but the real boss is Hugo, who is almost 2 1/2 years old. He’s from a place called Taiwan and he’s Suzanne’s special dog. Pine is my best pal and he just turned 2. He’s Josh’s dog and we have a lot of fun playing bitey-face and running around like crazy dogs. Sometimes Hugo gets in on it and tries to gang up on me, but I can take on both of them at the same time!
I like to have my tummy rubbed and I love my food. I really like the treats I get in class, too. I like to sniff at lots of things when we go for walks, but my favorite thing on walks is to trot, and sometimes run, when Jim feels like he can keep up with me.
I’m nervous around strangers, especially in our house, but we are working on that. Jim takes me out to run errands sometimes, especially to Mud Bay. I like it, but I’m nervous about it. I like when they give me treats there.
I really like to meet new dogs cause I really like to play with them. 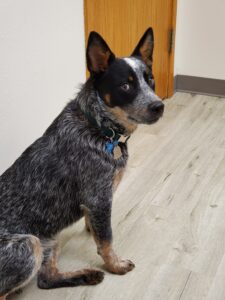 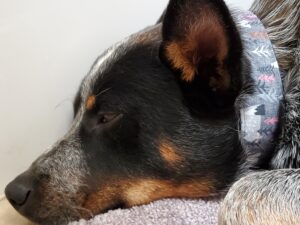 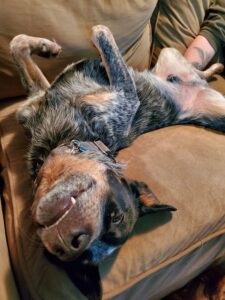