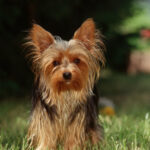 Therapy dogs are an important part of life for many people.  They are known to reduce blood pressure, anxiety and depression.  Therapy dogs bring comfort to people in hospitals, schools, nursing homes, and reading centers.  Therapy dogs are patient and calm.  They don’t mind being hugged, tugged on, or patted.  They are not afraid of wheelchairs, walkers, or jerky movements.  They amuse people with tricks.

How did we, as a society, discover the benefits of the therapy dog?  It all started in 1944 during WWII.  A member of  MacArthur’s 5th Air Force (a photo recon squadron) found a tiny Yorkshire Terrier in a fox hole in New Guinea.  Not being a huge fan of dogs, he gave her to another member of the unit, who needed $6.44 to get back in his poker game.  That’s where Corporal Bill Wynne came in.  He paid for the  four-pound Yorkie and named her Smoky.

Smoky spent the next 18 months by Wynne’s side in combat.  In January 1945, Wynne’s unit had a problem.  They had to run a communications cable across an air strip.  One way to do it would require shutting the strip down for several days, a dangerous proposition that would have exposed the planes to enemy bombing.  A better solution?  Smoky crawled through a pipe that ran under the air strip with the wires attached to a string, which was attached to Smoky’s collar.

Smoky also participated in 12 combat missions and was awarded eight battle stars.  Most dogs would retire proudly at that point, but not Smoky.

When Smoky’s partner, Wynne, became ill, his friends brought her to the hospital to visit him.  And that’s when therapy dogs were born.  Dr. Charles Mayo (of Mayo Clinic fame) noticed the little dog and took a liking to her.  He observed that the wounded soldiers’ spirits were lifted when Smoky was around.  He allowed Smoky to visit recuperating soldiers and even sleep with Wynne in the hospital.  Smoky continued to visit hospitals for  the next 12 years.

Smoky set the standard for therapy dog excellence.  Is your dog cut out to be a therapy dog?  There’s only one way to find out… sign up for therapy dog class at the Zoom Room!  Classes start on May 23.  Use coupon code “smoky2010” when you register online and save 10%!

And, if you are interested in knowing more about Smoky, read William Wynne’s book, “Yorkie Doodle Dandy: Or, the Other Woman Was a Real Dog.”