Meet Sadie, a five-year-old German Shepherd Mix. In 2007, Sadie found herself being rescued from a hoarding situation at eight weeks old.  Sadie (then called Jackie) and her family were removed from the bad situation by Pet Orphans in Van Nuys, where a certain person named Jessie was working as a volunteer. 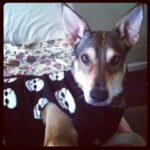 When Jessie’s family had lost their Yellow Labrador, Gordy, in 2005, Jessie’s dad vowed to never get another dog, because losing Gordy had affected him so profoundly. Jessie loved dogs so much, that she found herself volunteering at Pet Orphans.  She wanted a new family dog, and kept taking pictures of them and taping them to the refrigerator, her dad’s computer, and in all his drawers, hoping he would change his mind.  After repeated rejection, Jessie finally gave up.

That’s when Sadie showed up. Jessie fell in love. She says, “I fell in love with her shyness, her bright amber eyes, her satellite-dish-ears, her wild appearance, and her little doe-like tush.” Jessie knew she had to try one more time.  She took pictures of the 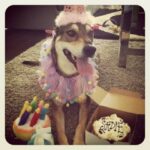 puppy and plastered the house with them, putting them anywhere and everywhere that her dad might look.

And it worked. Jessie’s dad called her while she was at school and told her to get home. Stat. Before Pet Orphans closed for the day. Jessie put it in high gear and made it before closing time. Jessie watched as Sadie worked her magic.  Jessie’s dad sat on the floor in the meeting room as Sadie was brought in. Even though she already knew Jessie, she made a beeline for the one person she had to win over. Sadie jumped into dad’s lap and sat down, content to snuggle and win him over. Needless to say, she became part of the family that day. 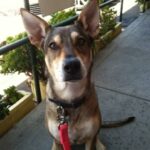 Now, five years later, Sadie hates pools, but loves swimming in the ocean.  Her favorite stretch of beach is Rosie’s Dog Beach in Long Beach.  She took to it immediately, like a duck to water. Her first time there, she jumped from the car and sprinted straight into the surf.

Sadie also enjoys chasing squirrels and pigeons and “looooooves” her Agility classes at the Zoom Room.  But, according to Jessie, her all time favorite activity is cuddling with her stuffed husky boyfriend Walter.

We have thoroughly enjoyed watching this lady blossom.  Congratulations, Sadie. Enjoy your free Private Gyms.  You have certainly earned them.