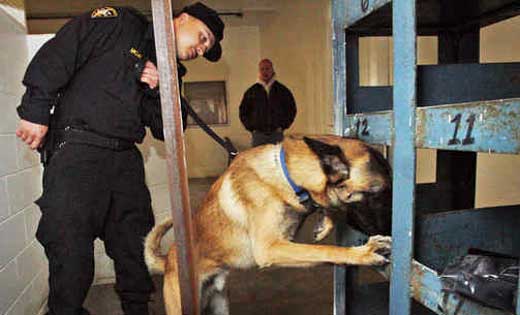 Here in California, more than 2,800 cell phones were confiscated from inmates in 2008 (that’s just the number of cell phones discovered; no one can estimate how many phones remain concealed.) One prison official admitted selling phones to inmates last year, earning over $100,000. In 2007, only about 1500 phones were found in California correction facilities. So is cell phone usage in prison growing? Yes, but law enforcement’s means of detecting cell phones has also ramped up, thanks to the use of scent tracking detection dogs.

The problems aren’t limited to California. In the first four months of 2009, officials confiscated 549 cell phones from Texas prisons. South Carolina uncovered 2,000 cell phones in prisons last year, and Maryland prisons yielded 1,642 through routine searches. According to an article in Time Magazine, “in a recent sting operation in Texas, an undercover officer was offered $200 by a prisoner for a cell phone and only $50 for heroin.”

Why are cell phones so highy prized? Staying in touch with family members is one often-cited reason, due to the incredible expense of collect calls from prison. But inmates can also use them to plot their escape. “I had an inmate escape from one of my prisons just this week, and guess what he used to get his ride – a cell phone,” says Richard Subia, assistant director for California’s Division of Adult Institutions. “According to our investigation so far, he contacted a girlfriend by cell phone and had her pick him up in one of the local towns. We’re still out searching for him.”

Tim English, an investigator for the Inspector General of Texas, explains, “With a cell phone, you can arrange other things. That’s the beauty of the cell phone – you have access to the outside world.”

Exactly what “other things” are being arranged? You can probably use your imagination. Assassinations, retaliations, drug deals, witness tampering. Last year, a Texas death row inmate was caught harassing a state senator from a smuggled cell phone. Recently in Maryland, a man was convicted of murder after ordering a fatal hit on a witness scheduled to testify against him. The hit was placed via a cell phone in prison.

Martin O’Malley, the Governor of Maryland, sums up the situation well in Corrections Today:

Nationwide, hundreds of thousands of illegal phone calls are being made from our prisons. Anecdotal evidence is all you need to see that cell phones constitute a significant threat to security within our collective correctional systems and to our overall public safety.

The four states with the biggest numbers – California, Florida, Maryland and Texas – have therefore reached out to the dog training community to equip law enforcement with trained scent tracking detection dogs to sniff out the plague of cell phones in prison.

Scent tracking dogs have been succesfully used for detection by law enforcement for many years – most notably with bomb-detection and drug-detection. But cell phones? How is this even possible? Clearly different explosives and drugs have unique odors that can be tracked by dogs, but cell phones? There are so many different models in place. Does a dog have to be trained on every cell phone model, wireless provider and family & friends plan? How do they know the difference between an iPhone and a payphone? Or a Blackberry from a prison guard’s walkie-talkie?

In short: What does a cell phone smell like!?

Turns out the answer is a simple one: the one commonality among all cell phones is the chemicals used in their battery. Training a scent tracking dog to hit on the smell of a cell phone battery is no different from training a dog on heroin or Semtex. True, some dog breeds are more naturally gifted than others at scent tracking, but any dog that can learn how to detect a tiny trace of marijuana embedded in the side panel of a van can learn how to find a cell phone.

Here at the Zoom Room, among our Advanced Dog Training classes, we offer a Scent Discrimination course. And one of the highlights of our class is – you guessed it – teaching your dog to sniff out your cell phone.

Why do we do this? We’d like to say we’re doing our part to fight against assassination plots, escaped convicts and witness tampering, but our reasons are more mundane, amusing and practical. We’ve discovered that the other thing all cell phones have in common, besides their battery, is their owners’ tendency to lose them.

So Zoom Room Scent Tracking graduates are uniquely equipped with a dog able to sniff out their cell phone buried under the couch cushions, or stuck in that clutch purse we wore to that party then promptly chucked in the bottom of the closet.

An iPhone may have a cool “Find My Phone” feature. But even that technology can’t distinguish between your clothes hamper and your briefcase. Our bright Zoom Room scent tracking graduates can. We’re incredibly proud of them – whether they end up saving the world, keeping you from missing that important call, or just amusing the heck out of us.