The benefits of positive dog training 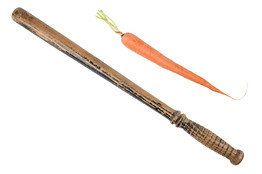 There is a massive amount of scientific evidence supporting positive reinforcement as the most effective dog training method. These studies typically focus on the main goal of training a dog – obtaining the desired behavior. But a new study from the University of Bristol examines other, equally important collateral benefits of positive training.

What is Positive Training?

Positive reinforcement training sounds incredibly simple – and it is! You reward your dog when he performs a behavior that you desire. This is the only form of training we use at the Zoom Room; we do so for a variety of reasons: it’s something that every member of the family can do; it can be performed anytime, anywhere; it produces the best and most consistent results; it encourages dogs to be playful, friendly and curious; it is effective with an enormous range of dogs; it is the most humane; it is fun; and it is the single most effective method as supported by countless research studies.

What is Compulsion Training?

Compulsion training goes by various names and includes several distinct methods. It is also known as coercion or punishment. It is mainly practiced by punishing a dog when he does not perform a desired behavior; or by applying punishment and then only relieving the dog of the punishment when he finally obeys. Shock collars or shake cans are two of the most commonly used forms of compulsion training. Compulsion focuses on the idea of dominance, which has been consistently demonstrated to be inferior to positive training, and which also can severely backfire when used on a dog who already has some underlying fear-based issues.

Without getting into the whole breadth of scientific research, here are just a few of the more recent studies that demonstrate the effectiveness of positive training:

A wonderful new study from the University of Bristol8 reveals additional benefits of positive training. They didn’t simply look at how well a dog performed a given task when he was trained with positive reinforcement vs. punishment. They looked at a broader range of the dog’s behavior and personality. Here’s what they found:

The conclusion is pretty clear. We want our pets to be naturally curious, playful, and friendly with strangers. This new study confirms what we see every day at the Zoom Room. Happy dogs, happy owners, together engaged in joyous learning.