Every once in a while a story unfolds before your eyes, touches your heart and you feel you have to share it.  The story of Honey’s weight loss after being adopted by Karin is inspirational to say the least.

This story started when Karin was looking on Petfinder for a female yellow Labrador Retriever.  After looking through various listings she saw Honey’s profile and after reading through it and seeing what her needs were she just, “knew we were the right match.”  Her only concern was that this adoption would be sight unseen; she wouldn’t have the chance to meet her first.

That didn’t end up stopping Karin though, she thought Honey looked adorable and was soon on her way to adopt the 5 year old yellow Labrador.  Upon arrival at Black Canyon Animal Sanctuary though she realized that Honey was more than just overweight and having thyroid problems.  “The Sanctuary thought she weighed about 75 lbs and was 15 lbs overweight… She was truly the fattest dog I had ever seen and was morbidly obese, not just overweight.”  The weigh in at Karin’s vet the very next day showed that Honey’s weight came in at 105.7 pounds! 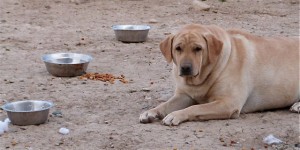 So on that day September 3rd Honey went on her diet.  Karin was bound and determined to help her new dog lose weight.  She started by counting calories and increasing exercise.  She also cut back on Honey’s food, down from 3 cups daily to 2 cups and included frozen green beans or other veggies, “the old standby for adding chewing time without many calories.”  Karin also used a dog food calculator on dogfoodadvisor.com to see exactly how many calories Honey should be getting per day.  She even switched foods a few times to allow for more food but fewer calories.

In addition to counting calories for her meals Karin also counted the calories for all the treats she was giving Honey during their training sessions.  Her favorite brand is The Honest Kitchen that makes high quality low calorie treats.  “Their ‘Pecks’ are a nice sized nugget and only .6 calories per treats.  Their other two varieties are bigger and only 2.3 calories each.  With the Pecks, she can have 50 treats in a training class and only be getting 30 extra calories.” 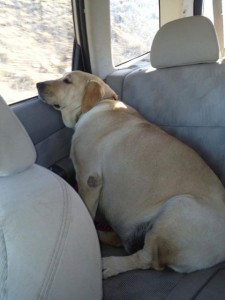 Using these strategies in addition to increased exercise Honey has managed to lose 37 lbs. in just less than 7 months.  On March 31st she weighed in at 68.7 pounds!  According to their vet the perfect weight for Honey would be between 67 and 68 pounds; a goal that Karin believes will be met within a week or so.

Due to this massive change we wondered if it had an effect on Honey’s personality and activity level.  To which Karin stated of course, she’s much happier and “she clearly feels better physically and seems to have much more confidence.”  As far as her activity Karin stated that living in the foothills west of Lyons gives them the opportunity to take a hike every morning up the mountain.  “It’s been a joy to see the difference in her energy level, ability, and stamina as she’s slimmed down.  She’s becoming an athlete and seems to live for her morning run.  The look on her face when she’s running is priceless.” 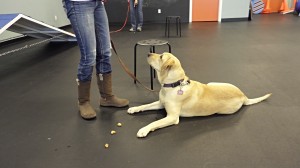 We’ve loved watching her progress here at Zoom Room and thought that maybe she might have a favorite class after all this time and apparently she does.  They both really like Pup-lates® for the strengthening and core building aspects of the class.  And, Karin feels that obedience classes have also helped to redirect Honey’s focus away from food and provided mental stimulation.  Their goal is to start agility classes soon! 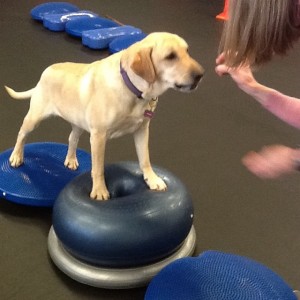 This is such an inspiring story that we just had to ask Karin to share it with us; she also provided the pictures in this post.  There was one last thing we asked her and that was what advice she would give to other owners with a pet needing to lose a few pounds and this is what she said, “It’s basically the same strategy we would follow for human weight loss.  Try to decrease calories and increase exercise.  It’s important to do it gradually and not expect too much too soon.  I think, for me, the key was to try not to get discouraged.  Because Honey had SO much weight to lose, I expected that she’d lose faster than she did.  It really helped me to refer back to her before pictures to remind myself of how far she’d come.  I’m thrilled to think that the hard work and discipline it took from both of us will most likely add not just years, but quality to her life.”

Thanks Karin and Honey for sharing your story, you’ve inspired us!