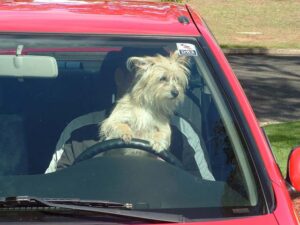 Twenty-five years ago, a Kentucky motorist was the first to use the “dog defense” when pulled over for drunk driving. When officers stopped William David Bowen, a 34 year old from Louisville who had been weaving in and out of traffic, they attempted to administer a breathalyzer test, but Bowen refused, claiming that he wasn’t the driver – his dog was.

His dog, an Alaskan Malamute aptly named Sir Anheuser Busch II, or “Bud” for short, was his guide dog, Bowen claimed. Yes, the driver claimed that he was blind, and that his assistance dog helped him drive by barking once for red lights, and twice for green lights. So if his driving was erratic, the unlicensed driver protested, it was Bud’s fault. Bud, he claimed, could help him with traffic lights, but couldn’t distinguish the white lines in the road, thus the weaving…

The Kentucky court rebuffed Bowen’s argument with a simple retort: dogs are colorblind. Therefore, they concluded, there could be no merit to the man’s claim.

This proceeding took place in the summer of 1986. Back then, it was commonly thought that all non-primate mammals were completely colorblind. There was no expert testimony. The judge and DA took it as a matter of common knowledge that dogs cannot distinguish colors. But in 1986, the field of neuroscience was still in its relative infancy. In fact, the pioneering research in canine colorblindness wouldn’t take place until three years later, in 1989. That research clearly established that dogs are NOT colorblind.

So, in retrospect, is it possible that Bud was really trained to bark at the stoplights? Bowen ended up pleading guilty. Did he get a bum deal?

Humans have three types of color-sensitive cones, allowing us to distinguish every color in the visual spectrum. Dogs, on the other hand, have only two types. They can distinguish only two broad categories of colors: red-yellow-orange-green colors all appear essentially the same in color, and blue-violet appear as a separate, distinct color group.

A red Kong sitting on a green lawn therefore looks like a “Where’s Waldo” puzzle to a dog, if that dog is only using his eyes. (In actuality, the dog can find the Kong just fine, by using his phenomenal sense of smell.)

But with traffic lights, not only are red and green indistinguishable, but yellow or amber is as well. If you were designing a roadway for dogs, you’d need a simple red (or green) for stop and a blue (or violet) for go.

But that’s probably not a great idea. And not just because of the lack of opposable thumbs. Pet dogs also tend to be fairly myopic, with relatively poor distance vision. (They also can’t see objects closer than about a foot, which is why they prefer to sniff anything brought close to their face.) Scented traffic lights would be far more effective!

Next time you hit the road, be careful out there. Keep an eye out for drunk drivers. And colorblind dogs.