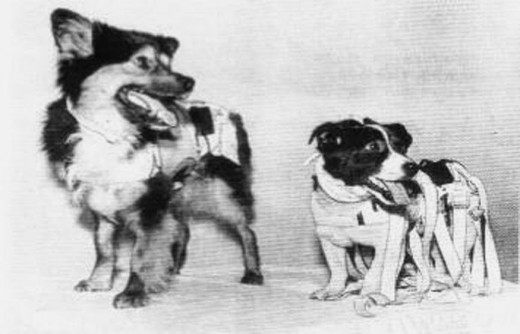 Forty-five years ago, Veterok and Ugolyok landed on Earth, after breaking the record for the longest time in orbit: 22 days. This remains the longest space flight of any dog!

Veterok, which means “Little Breeze,” and Ugolyok, which means either “Ember” or “Little Lump of Coal,” depending on whom you ask, wore little corsets as they boarded Cosmos 110 in late February, 1966. The Soviet researchers behind the mission maintained utter secrecy during this Space Race Era. Even the breed and gender of the dogs were considered critical state secrets!

We always marvel at the height that dogs achieve when leaping over hurdles and jumps on the agility course – but these two dogs broke all records with their staggering trajectory which took them 562 miles above the Earth’s surface!

The primary reason for the voyage, as far as we know, was to examine the effects of radiation, as their voyage took them through the Van Allen radiation belt. The dogs touched down in March 1966 with no apparent signs of any health concerns or damage – thus helping to pave the way for manned flights.

The dogs’ flight was also televised! Millions of Russians watched Veterok and Ugolyok on TV, during the early stages of the trip.

We’re not big fans of shooting dogs into radiation belts… but we do want to salute these high-flying early pioneers!