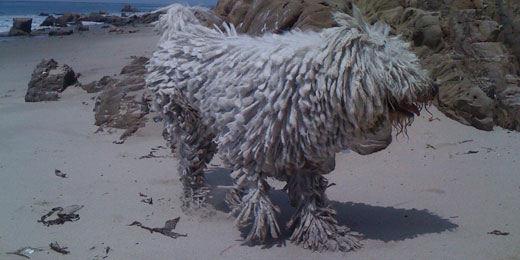 Dog Celebrity: The Walk of Fame

Have you ever wondered what it would be like to be famous? Or to date a celebrity? We have a simple solution for anyone who’s ever tried to imagine how they’d handle fame: Borrow our dog for a day. Not even a day – just an hour – and try to walk down the street.

Unofficially, the Zoom Room does have a mascot: Clyde. A big behemoth of a Komondor. There aren’t many Komondorok (the plural form of Komondor) in the U.S. – so it’s a sight most folks have never seen. The place many people have seen a Komondor was gracing the cover of Beck’s album Odelay, many years ago, which depicted a giant white dreadlocked mop of a Komondor doing a bit of floppy mid-air dog agility.

But enough about Komondorok. Let’s talk about the Pawparazzi. Who are they? The Pawparazzi are every man, woman and child with a pair of eyes (and usually a camera phone) who spot Clyde coming and instantly zoom over to ask any or all of the following:

Clyde is a chick magnet, a baby magnet, a dog-lover magnet, a camera magnet, and if magnets were capable of snapping photos with their iPhones, he’d even be a magnet magnet.

Here’s a statistic: we once tried to walk Clyde the roughly seven blocks from one end of Lincoln Road to the other in Miami Beach. We didn’t stop to visit any shops. How long did it take us to walk seven blocks? Slightly over an hour and a half. You’d think we’d be used to it from rush hour in L.A. But posing for Pawparazzi (not us ourselves, just our dog celebrity) makes the 405 freeway seem like a zoom through an agility tunnel.

Well there’s a turn of events. As we were just about to post this, we got a call – from the producers of the sequel to Beverly Hills Chihuahua – they’d seen a video of Clyde as a pup trying his paws at dog agility on YouTube and asked if he’d like to be in their movie! (There was some talk of his performing with a Reggae band. Really.)

In the meantime, if you do spot Clyde in one of his favorite spots around town, feel free to stop and say hi. We actually don’t mind. And Clyde loves it. He loves everything. Dogs are great.