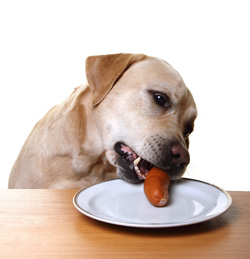 Especially if you have a medium or large breed dog, it’s a topic that comes up so often in dog training: counter-surfing. Counter-surfing dogs often develop ingenious solutions to score food off of the counters, employing elaborate tactics to stealthily acquire and consume their “prey.” Stories abound about dogs that have learned how to open the refrigerator in order to consume the holiday turkey. Or the Pit Bull who stole an entire tin of Danish butter cookies off the counter and buried them under his bed for a week. (True story!)

Counter-surfing – or stealing food on counters – is not only an irritating habit, it is potentially dangerous and costly. Dogs can easily become ill by eating things they’re not supposed to eat, which means that you could not only lose those steaks you were about to grill, but you could also be in for some expensive vet bills. Furthermore, dogs track germs and bacteria onto a surface that really should be reserved for food preparation, leaving the potential for you and your family to become ill.

A counter-surfing dog has a habit that is notoriously difficult to break. It’s a problem that is easily prevented in puppies, but hard to fix in older dogs. The reason is that the dog has a reward history behind his behavior – when he jumps up and finds food, he’s rewarded with a tasty tidbit. Using food as a reward is a very effective way to reinforce a behavior, so for most dogs, finding just one or two snacks on the counter will create a lifelong forager. For young puppies, if they never find out that food can be found on counters, they simply won’t look there in the future. A dog repeats behaviors that are successful – so the key to breaking counter-surfing is to eliminate the reward. This means removing all food from the counters, and not allowing your dog to have the opportunity to find food there – ever.

However, even if you remove all rewards on the counter, it doesn’t mean that your counter-surfing dog will stop looking there, because your dog has a long and successful track record of finding food on your counters. So patience, even for months, is needed. Additionally, a frustrating component to breaking the counter-surfing is that the dog often doesn’t engage in the behavior when you’re present. They’ve simply learned that you in the room plus food on the counter equals no reward, because they’re reprimanded or corrected for putting paws up on the counter. However, the moment you leave the room, the coast is clear again, and that piece of leftover chicken or stick of butter is theirs for the taking. This is simply because dogs are opportunistic predators, and they will take advantage of any breakdown in the system that allows them to benefit.

The solution for this kind of behavior – misbehavior in your absence – can be tricky, and usually involves some sort of booby-trap. The simplest solution is just to remove the reward – but if you have young children or a forgetful spouse, you may have an easier time training the dog than your husband. Some trainers employ a startle response to change behavior – a technique that can sometimes scare the dog from repeating a behavior. For example, a soda can filled with pennies tied to a piece of cheese left conveniently near the dog’s “hunting grounds” can work. A spray device – called “Scatt!” (Premier Pet Products) works on the same principle – any motion triggers a spray of citronella, which both dogs and cats find distasteful. However, these devices, whether store-bought or home-made, have their limitations when they come up against die-hard counter-surfing dogs; many dogs will simply learn to tolerate the startle devices because the food reward up on the counter is so incredibly valuable.

Here’s where technology can come in handy: a nanny cam can be used to monitor the counter, and if you set up your laptop nearby, you can often set the dog up to do it. When your counter-surfing dog springs into action, startle him with a loud “No!” or “Ahh!” and enter the room. Your dog may soon become convinced that you’re always watching him and cease jumping up for food.

Finally, counter-conditioning the behavior can also show positive results. Redirecting your dog to food on the ground, as opposed to on the counter, can also help reduce counter-surfing. Leave some low-value food (an apple, crackers, etc.) on the counter and then tell your dog to “Leave it!” When he does, reward him from the floor (preferably in his dish) with higher-value booty – pieces of chicken or hot dogs.

For foraging dogs, an ounce of prevention is worth a pound of cure, so if you own a puppy or young dog, make sure that he or she never has the opportunity to eat off of the counter. However, if you’re already the owner of a hardened and accomplished thief, you can still achieve positive results if you are patient and really commit to changing your own behavior and removing any possibility of rewards. Whatever you do to stop dog counter-surfing, be consistent. Consistency in dog training is the key for changing any kind of behavior.