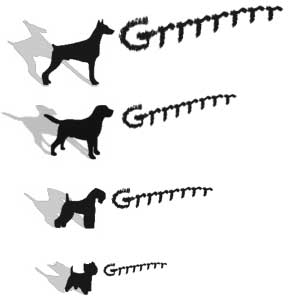 With many dogs, their bark is worse than their bite. But new research shows that dogs can recognize the size of another dog by its growl.

The study was conducted by one of our favorite researchers, Péter Pongrácz, and was published in the journal PLoS ONE. The study breaks new ground in several important areas of animal behavior.

A dog obviously has a significant need to be able to size up an adversary in order to decide whether to fight or to flee. Dogs have developed, the study reveals, a marked ability to correctly ascertain the size of a dog sheerly by virtue of its growl.

In the study, dogs were shown two projected photographs: a small dog and the same photo enlarged so as to make the dog appear larger. They were then played a recording of a growl by a small breed dog or a large breed dog. When they heard the small breed dog growl, they looked at the photo of the smaller dog; when the heard dog growls from a larger breed, they looked at the big dog photograph.

This also reveals another startling discovery: that dogs carry a mental construct of other dogs which can be realized via photographic, two-dimensional representations. This type of behavior has often been demonstrated in primates, but not in dogs.

Another groundbreaking aspect of this research is that it marks the first study of any type of creature that demonstrates that an animal can recognize size based solely on a vocalization.

Interestingly, some of the dogs in the control group were shown photographs of cats instead of dogs. These dogs almost always looked to the left, regardless of what dog growls were played; this is consistent with earlier research which shows that dogs tend to look to the left when they encounter something novel or unexpected.

Researcher Pongrácz summarizes the findings especially well when he writes, “when growling, dogs don’t lie about their size.”

You can read the full research study in the journal PLoS ONE.